John has written three manuals to address important issues. First, he developed a Mentoring Manual to help prepare people to mentor inmates one-to-one. Almost any Christian can learn how to mentor, even though not every church can afford to open an aftercare center. Secondly, he realized prisoners needed to prepare for their release, so he wrote Preparing For Success on the Outside, which won the Texas governor’s award for The Most Innovative Program in 2003. In late 2005, he released, with Marian’s help, Starting and Operating a Post-Prison Aftercare Facility. Our hope is people will be helped to start and/or build up their facility so it’s not likely to fail.

The Prison Bible is published!

profit organization, incorporated in the State of Texas.

All donations are tax-deductible. 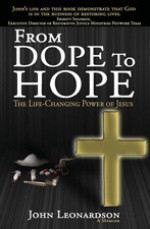